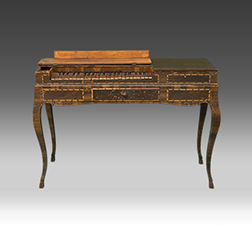 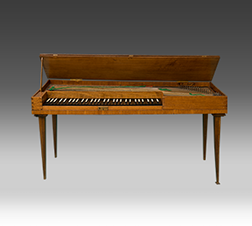 Clavichord is a cither-like stringed instrument with a keyboard that allows generating sound by striking the string with a tangent. Emergence of the clavichord was determined, firstly, by the percussive method of playing the strings; secondly, by a monochord stand, which was moved along the string to obtain sounds of various heights of pitch.

The name of the inventor of the clavichord and the time of the invention has not been established exactly. It is believed that the design of the percussion keyboard tangent mechanism was in use already in the 12th–14th centuries. So, in Western Europe of that time there was a mysterious musical instrument called the “English chessboard” (German: Englisches Schachbrett, French: echiquier). Further study of this phenomenon led to the quite reasonable assumption that the “chessboard” in this case was called a string keyboard instrument with individual movable supports under the strings, which resembled arrangement of chess pieces on the board. One way or another, clavichord, having become popular from the second half of the 14th century, first of all, in Germany, Scandinavia, Portugal and Spain, almost had become history by the beginning of the 19th century (today, it is played in the framework of the international movement “Early music”).

The instrumental study literature believes an illustration in the Weimar Book of Miracles (circa 1440) one of the earliest images of the clavichord.

In Russia, clavichord appeared no later than the 17th century. One of the earliest (if not the earliest) written references to the instrument dates from 1674–1675.

On February 20, 1674, S. Gutovskiy was told to “put strings on the clavichord” («положить струны на клевикорт») for Peter Alekseyevich; on May 28, 1675, the boyar A. S. Matveyev bowed low for Fyodor Alekseyevich to receive “clavichords and two octaves (клевикорты да две охтавки) [probably, single octave clavichords in the form of a book]”. During the 18th century, - much less – in the first third of the 19th century, in Saint Petersburg, Moscow and other cities of Russia, the clavichord was popular. In Saint Petersburg, for example, in 1796, an anonymous author wrote, “Claviers or clavichords are so well known to everyone that I have nothing to bother our readers with excessive description...”.

Perhaps, many citizens of Saint Petersburg learned about the existence of the instrument for the first time from the “Saint Petersburg Vedomosti” newspaper no later than on March 6, 1728. It was reported to them that in Danzig they could buy an organ “for 200 rubles”, clavecin for “100”, and “an excellent clavichord, with three choirs [with 3-string choirs] with excellent voice and of excellent work…” — for “30 rubles” (“Vedomosti”. March 6, 1728. No. 44).

Before the newspaper announcement about the appearance of the piano — the main rival of the clavichord — in the city, as many as 36 years had to pass (see the corresponding section), therefore the German-speaking (“Zeitung”) and the Russian-language “Vedomosti” newspaper had no choice but to continue to advertise the clavichord among other musical instruments. However, the following announcement appeared no later than November 13, 1747: “Bey dem Instrumenten-Macher Joch. Bernh. Wilde… ist ein… Flügel… wie auch einige Clavierre (sic!)…”; “...the instrumentalist Mr. Joachim Bernard Wilde sells clavicymbalos and clavichords...” (“Zeitung”. November 13, 17, 1747/ Nos. 91, 92; “Vedomosti”. November 13, 1747. No. 91).

The above lines are indicative of the fact that newspapers were correct in translating the term “Clavier” as “clavichord”. In doing so, they set the tone for the subsequent versions of the translation of the same term, often full of inaccuracy or uncertainty. Those translations, for example, read that “Clavier” is nothing less than clavier (!), clavecin, piano, etc. And sometimes it is impossible to understand which of the keyed instruments was called “clavichord”.

Later, the word “clavichord” (more often — “clavichords”), which sounded so beautiful in Russian, eventually acquired a collective meaning. For example, a workshop combining instrument makers of various specializations was called “clavichord”; by tradition, any straight-line keyed instrument can be still referred to as clavichords...

The strings (as a rule, 2-stringed choirs) are stretched between the pins of the string holder and the pegs of the wrest-pin block. They are pulled from the pins to the right, thrown over the bridge (stand) of the resonant deck and attached to the pegs. At the same time, the bridge transmits vibrations of the strings to the deck of 3 mm thick (sometimes thinner). The deck is located on the right, covering about a third of the body cavity. This very limited volume is actually the clavichord resonator body.

Each key ends with a tangent attached — a narrow plate of brass. When struck with a tangent, the string is divided into two sounding parts: the long one – from the tangent to the bridge — producing the expected pitch, and the short one — from the pin to the tangent, producing only the overtone. So that the overtone does not interfere with the intonation purity, the short parts of the strings are to be wrapped in zigzag by cloth strips. These strips dampen the vibration of short parts of strings at the moment of impact of tangents, and at the time of removal of tangents from strings, they dampen vibration of their long parts. Such damping is standard for the clavichord.

Since the beat of the tangent causes both parts of the string to vibrate simultaneously, its sounds not long. Given in addition the small size and depth of the tangent, as well as weak impact, it becomes clear why the clavichord was considered an instrument of exclusively chamber sound. At the same time, a special charm of the clavichord consists in the special touch, by means of which the musician’s finger swings the key in the vertical direction, thereby slightly changing the pitch. The result is a vibrating sound that resembles singing. This technique was called “Bebung” (from German: beben — to tremble, shiver).

Until the beginning of the 18th century, there was only a “connected” (from German: gebundenes) clavichord. The main idea of its design was that some strings were connected with the work of at least two tangents (two keys) and produced sounds that were spaced a semitone apart. It followed that the same string of the “connected” clavichord could not be used to play well two notes in a sequence, nor could it be used to play two notes simultaneously.

Due to the constantly growing trend for using tonalities with two or more signs in a key, complication of a harmonic language, etc., the “connected” clavichord became increasingly neglected. This resulted in the appearance (initially in Germany) of a “unconnected” (from German: ungebundenes, bundfreies) clavichord, which entered into European use by the second half of the 18th century. Its design suggested the rejection of the connexity, i. e. playing one string with the help of two or more keys. In the instrument, each string corresponded to a single tangent (key).

As a result, on the one hand, the “unconnected” clavichord became more multi-stringed, large, heavy, on the other hand, it became more powerful in terms of sound, capable of producing continuous sounds longer. It became possible to play the cantilena (“to sing”) more perfectly, to strike a variety of chords, to perform passages in any tone of the range. But later on, even the “unconnected” clavichord ceased to meet the demands of musicians, composers and listeners. A collective image of the clavichord was formed, which drew the line under its ability to survive, competing with other instruments. For example, in 1802, one of the German dictionaries called it “the consolation for the sufferer and the sympathetic friend for joy.”

This is how it was in Germany. At the same time, in Petersburg, they continued to teach music with clavichord: “One clavichord teacher, who has already taught successfully a good many, wants to be hired by a gentleman for teaching children...” (“Vedomosti”. December 24, 1807. No. 103). Nevertheless, information about the instrument appeared increasingly rarely, it became colorless until the name “clavichord” changed to other instruments: “New clavichords, i. e. the fligel-fortepiano [wing-shaped piano] of 6 ½ octaves are sold because of departure...” (“Vedomosti”. March 6, 1827. No. 19).

The above advertisement (and in many others of that kind) savors with the suggestion that the clavichord finally hands (unless it has already handed) over the baton of the percussion playing strings to PIANOFORTE, which is the keyed hammer-action instrument.

The museum holds two “connected” clavichords. They belong to the category of the rarest monuments of the national musical culture. In 1924, at the time of being transferred to the museum, the instruments were requisitioned property; therefore their early history of existence is unknown. However, it is safe to say that these are the clavichords from Saint Petersburg. Like many others, in the old days, they also had a “foreign” origin. Probably, passing from hand to hand under the same newspaper ads, the instruments sounded in different houses of Saint Petersburg. Perhaps, someone’s children under the guidance of a “clavichord teacher” used them to comprehend the basics of performance before moving on to playing the piano... These rarities are the only clavichords in the country that have survived.