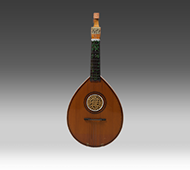 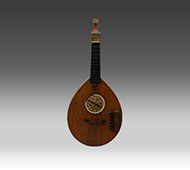 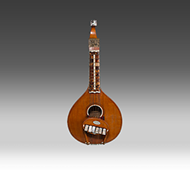 The body is pear-shaped. The deck is arched, decorated with a carved insert rosette, or with a colored wood inlay. The bottom is flat. The neck and the peg plate (peg box) with elegant finials are cut, as a rule, from one piece of maple. Peg plates are supplied with dial pegs, while peg boxes – with violin type pegs. The fret board is arched, with metal cut-in frets, often with 3–4 holes for attaching the capo — a device that enables the musician to raise the height of pitch without changing the fingering. Most often, it is equipped with 6 single metal strings or 10–14 choirs, partially single, partially 2-string.

It is assumed that the English guitar migrated to England from Italy in the middle of the XVIII century.

The high ratings of the guitar in England in the period 1750–1810 was due to the desire of the nobility, namely, the fair sex, to play music on simple musical instruments (a similar situation was observed in the same period of time with respect to the hurdy gurdy and bagpipes). Guitars were supplied with a keyboard so that those playing music could master the technique of playing with the right hand, and so that the ladies, while keying with the fingers of their right hand, would not spoil their well-groomed nails…

English keyed guitars from the museum collection vividly illustrate what was said about the instrument. The guitar by master J. Kirk calls particular attention to itself not only because it is equipped with a piano and harpsichord 6-key keyboard, but also with its sophisticated decoration that disguises the attribute information about the instrument. So, on the fret board, under the turtle cover, the master placed 4 paper labels on which he wrote his name, place and year of the instrument creation in microscopic handwriting...